It’s no accident that San Luis Obispo is the happiest city in the United States.  San Luis Obispo has a population of 44,000 people, and, according to a 2008 Gallup-Healthway Poll, ranked number 1 in the U.S. in overall emotional health.

Dan Buettner is author of Thrive, a book that details his investigation into why some cities can boast a higher rate of emotional health than others.  Dan traveled to the places where the population ranks at the top of reported happiness.  Answers to questions about where these places are and what makes them different are discussed in his book.

San Luis Obispo shares several characteristics with other cities around the world that consistently rate high on the happiness scale.  The town is generally quiet and pedestrian friendly.  Most people have short commutes to work from their home so biking and walking are popular travel options.  Crime rates are lower than the national average, and safety fears are rare.  The range of incomes across the town’s population is narrow as well.  Economic equality tends to level the social playing field in a way that allows more people to relate to one another.

San Luis Obispo has several unique characteristics that make it a happy place to call home.  The city planners deliberately kept several ideas in mind when funding municipal projects.  The designs include issues like supporting the arts, reducing traffic, creating parks, and keeping the public active and involved.  According to Mr. Buettner, a vibrant artistic community has strong correlations to a city’s emotional well being.  Happy people usually have access to the various types of artistic expression.  Places that are aesthetically pleasing tend to create cheerful environments to live in.  San Luis Obispo developed a city center for artists to present their work prominently. Residents and visitors both have ample opportunity to enjoy many types of creative expression. 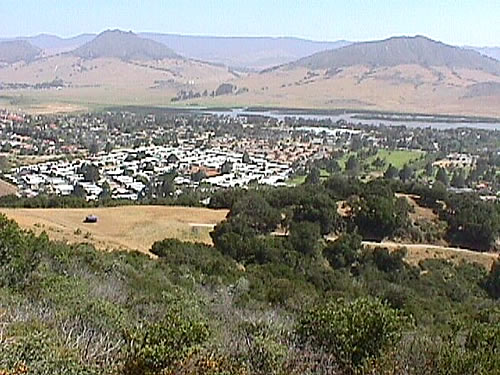 Sidewalks, wide bike lanes and measures to reduce automobile traffic increase physical activity while reducing noise and air pollution. Noise can be a significant cause of stress.  Walking and outdoor exercise generally leads to physical, mental and emotional health.  In a further effort to encourage non-motorized traffic, San Luis Obispo began requiring new office buildings to include showers and places to store bicycles. Workers are encouraged to commute to work under their own power.

Over 3000 acres of natural landscape, purchased by the county Land Conservancy, surround the town.  Parks, forest trails and wildlife preserves have been set aside to discourage suburban sprawl and promote outdoor activity. Housing growth is limited to 1% per year so residents are assured that the picturesque scenery they enjoy today will be available for many years.

As part of the traffic reduction plan, drive through restaurants were banned.  While the intent was to address driving habits, health benefits were also observed.  For instance, obesity rates and associated health care costs dropped as fast food eating went into decline.  National obesity rates are more than 50% higher than San Luis Obispo’s.

Socially active people often rate themselves as being happiest.  San Luis Obispo puts city planning issues to referendum so residents must stay engaged with each other when making decisions about the city’s future.  The results are both pragmatic and healthy.  Public debates are held to discuss various perspectives and opinions about how funds should be spent.  Attendees have opportunities to share personal ideas and understand those of others.  These types of social gatherings give people a chance to relate and think of how the community can deliberately grow.

Compared to income, education level and religion, where you live rates as the most important factor in overall happiness.  While there are many things you can do inside your own home to eliminate unnecessary tension and promote well-being, the geographic location you choose usually matters most.  This city’s lessons about how activity levels, the arts, and social interaction can affect a person’s happiness are ones we can all learn from in designing happiness into our community.

(This article was copied and modified from an article that appeared in Parade Magazine October 3, 2010.)