Response to threats to our economy like the coronavirus usually come in at least two waves. We are headed for a real mess – but we could give it a silver lining.
To see the size of the mess, look at this chart, which shows the number of unemployment insurance claims filed last week compared to the history of claims filed going back to 1967. 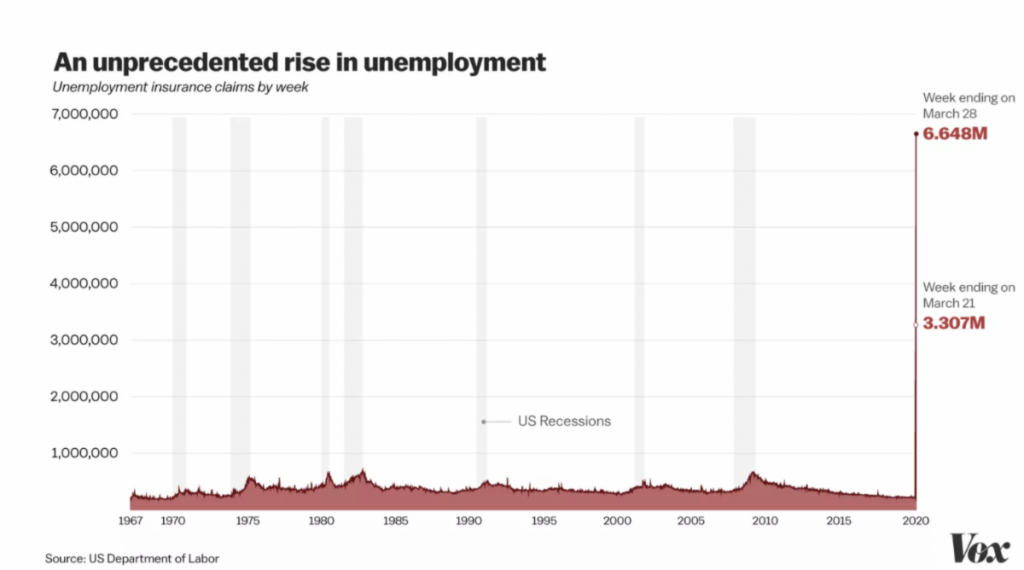 Federal and state economic rescue efforts can fix two problems at once if we act quickly.
According to a massive survey by the U.S. Environmental Protection Agency, one-half of the nation’s 115,000 K-12 schools have significant indoor air quality problems. [1] Parents and teachers in those older buildings are blamed for below-average student performance when it is the building itself that is a major contributor.One-half of all of America’s K-12 schools are over 45 years old. Many are much older.Scientific research [2] [3] has demonstrated that poor indoor environments lower student performance by one or two letter grades. Fresh air that helps the student’s brain work used to be delivered by opening windows, kids walking to school, and taking recess outside. Now they ride school busses, recess is often indoors, and the windows have now been nailed shut out of security concerns.These scientists have taught us that fixing obsolete buildings would be a huge help to our nation’s school system, while lowering future need for social welfare programs designed to help poorly educated adults. In most states, K-12 schools are paid for by two funding sources. Teacher and administrators’ salaries are paid for by state taxes, with every school getting an equal amount per student for instruction (although richer school districts have the ability to add money on top of that). Building construction and maintenance costs are paid for by local taxes. Communities with a low tax base have old buildings that block social mobility, generation after generation. One in five Americans either works in or attends one of our local K-12 schools – around 60 million of our friends and neighbors. We can help fix half of all America’s schools by learning lessons from mistakes made 13 years ago. After the 2007 economic collapse, there were two major bills signed. The first, called TARP, was the rescue portion because most of it went to keep many banks from failing. The second was called the RECOVERY ACT and was designed to be an economic stimulus. THE RECOVERY ACT spent $24.4 billion 4 to repair or rebuild only a small portion of the 100,000 school buildings across the county. It also spent $105.3 billion (more than 4 times as much) fixing federal and state government buildings, public roads, bridges, mass transit, and other physical property. Our economy is headed for a catastrophe much larger than the recession of 2008. Like the efforts made in 2007 – 2009, Congress is planning to take a number of steps to help with economic recovery. As our crisis unfolds, it is this second piece of legislation, being prepared now, that can be used to solve a major problem in our nation’s schools. The first step, called the CARES act, was signed by President Trump on March 27, 2020. It allocated two TRILLION dollars in federal assistance – mostly to offer economic relief to those individuals and companies under great stress in the short term. Our schools can benefit from the next piece of federal legislation, which will be different from the first one because it will be designed to be an economic stimulus. It will contain a lot of money for construction in our national infrastructure. If everyone reading this would call or write their elected officials, and insist that a substantial amount of the stimulus bill now being drafted be aimed at fixing our ancient schools, it would have the same economic impact as the amount of money spent again on roads, or bridges – but it would raise the learning, health, and prosperity of more than half of the students and teachers in the country. Let’s not waste this crisis. Let’s get on it.
[1] https://www.epa.gov/schools-air-water-quality/healthy-schools-and-indoor-air-quality
[2] https://thepollutiondetectives.org/wp-content/uploads/2020/02/TPD-handout-Right-Under-our-Noses-February-3-2020-fk9253.pdf  pp7-9
[3] https://thepollutiondetectives.org/bibliography-articles-about-co2-impacts-on-learning/
[4] https://www2.ed.gov/policy/gen/leg/recovery/factsheet/overview.html

About the author: Francis Koster Ed. D. is a retired pediatric health system administrator living in Kannapolis, North Carolina. He has set up a library of electronic tools that help teachers and students detect pollution in schools, including mold, 5 kinds of air pollution, radon gas, and lead in drinking water. You can see more at www.thepollutiondetectives.org