Every major supermarket chain I have spoken to tells me they were having trouble obtaining reliable large shipments of locally grown items.

A great opportunity to improve our nation’s health and economy exists.

This is a competitive challenge for the supermarkets, because research has shown that almost 30% of shoppers say they would consider switching to another chain if their favorite store does not carry an adequate amount of locally produced food. 70% of these shoppers say they would pay a premium of up to 10% to for locally grown food, increasing local farmers income. 1 , 2

In order to satisfy this demand, a few industry leaders have shown the way.

Virginia’s Food City grocery chain worked with the Virginia Farm Bureau, and successfully grew its sales of “locally grown” products to about 20% of all vegetable sales, increasing area farmers income from half a million dollars a year in 2000 to ten times that much in 2011.3, 4

Already a leader in this area, Wal-mart has set a goal of to sell 9% locally grown produce by 2015.5

An organization that has taken positive steps to help farmers seize this opportunity is Pilot Mountain Pride, located in the Winston-Salem area of North Carolina.

They worked with area small farmers and Lowes Foods to develop a relationship to market produce from many small farms in a way that grocers are accustomed to receiving it – in large amounts. They enroll farmers via the internet, word of mouth and training opportunities and advise them of opportunities to sell, as well as combining small harvests from individual farms for sale to customers with requirements for large amounts. They also train the farmers in food safety “traceability to source”.

Lowes has put a “local face” on the food by posting near the vegetable department pictures of local farmers fromLowes buy product. 6

First, food is one tenth of our economy. 7Unfortunately, we send most of that money away from where we live and work.

Almost none of the food you eat is grown near where you live, and a very large amount is either grown in other countries or 2500 miles away on the other side of ours.

On the list of crops which we import are some real surprises. Brussels sprouts, garlic, cucumbers, peppers, eggplants, squash and tomatoes were all locally grown in the 1960’s, but today almost half of all we eat are imported! 8

Second, our appetites and standards have shifted.   The salad you ate on this cold day contained lettuce, tomatoes, peppers, almost surely imported because those crops do not grow near you during the winter. Prior to 1960, your salad would have been coleslaw, or kale and apples, or some other winter crop that stored well. Since field grown salad contents are not produced all year around, supermarkets must import them many months of the year.

Third, our desire for tropical fruits and vegetables like avocados, pineapples, and kiwi has grown.

Forth, imported food gets a surprising subsidy. When food is shipped between countries by air or ship, there is no tax on the fuel used. It is cheaper to ship a crop like oranges from Central and South America to our east coast than it is to ship them from California. (The European Union has a proposal on the table to change this during 2014 so as to encourage energy conservation and slow climate change.)9, 10

One of the ways that local farmers can guarantee the supermarkets locally grown food 12 months a year is by growing hydroponically in labor and technology intensive greenhouses. 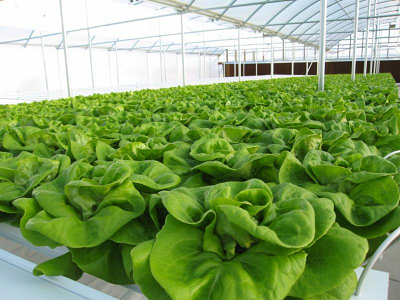 The yields are much better than open field farming – 20 times more harvest for cucumbers and colored bell peppers, and 5 times more for tomatoes – and they produce year around, solving the supermarkets supply variability problem, while providing the farmer steady income.

Food production is granted tax breaks and special treatment in zoning by local authorities.  Since hydroponic crops can be grown in greenhouses in the middle of town, or in old abandon furniture factories and unused schools using LED lighting, This opportunity presents a challenge to zoning and taxing authories, because they have to set aside obsolete notions of what qualifies for “agriculture” treatment under these regulations.  If they do not make these mental adjustments, it will be too expensive to raise the food locally grown by our neighbors, and we will continue to buy food grown in other nations.

The rule of thumb is that a dollar spent locally increases the local economy between $3.00 and $7.00 due to a multiplier effect. Think about the local and regional economic impact if we apply that notion to the 10% of our countries economy we spend on food.

Environmentalists, food safety folks  and “job creators” can join forces to create a stronger, healthier America. What an opportunity!