School districts across the country are saving money and energy by installing large solar arrays on their rooftops. What is normally considered to be an expensive undertaking is now possible by a growing number of financing options in the world of solar electricity.

Our schools are a significant source of energy consumption. The air conditioning and heating in these large buildings often run continuously, which translates into large electricity bills and fossil fuel use.

The perceived cost of switching from traditional sources of electricity to renewable ones is often considered to be too high to justify. In our educational system, tight budgets can be compounded by an economic recession. When schools are laying off teachers and eliminating programs from the curricula, projects to reduce carbon footprints as well as electrical costs can be overlooked as effective cost saving solutions. Solar and wind project often come with hefty price tags, but today there are several options.

Northwestern Regional School District Number 7 in Winsted, Connecticut reviewed their options to install a solar panel array on the roof of their 250,000 square foot high school building. The desire to act as stewards of the environment was strong, but the pressing issue involved how to fund related projects.

After examining several financing options, a Public/Private Ownership plan was selected. In this arrangement, a private company installs and maintains the solar equipment and extends a Power Purchase Agreement (PPA). The PPA offers a discounted rate for only the power produced on-site and reduces initial installation and ongoing maintenance costs. Many, but not all, states have legislation which allow similar financing arrangements – search TheOptimisticFuturist for other leads.

In this partnership, the private company, MP2 Capital, owns and maintains the 1937 solar panels installed on the school’s roof. The electrical power generated by the solar panels is bought by Northwest Regional School at a 20% discount over a 20 year term. This solar array is estimated to generate 490,000 kw-hours of electrical energy annually. This power production from the sun takes care of over 30% of the school’s electrical needs. From a budget perspective, this translates into savings of $26,000 per year.

The initial investment was made possible by funding from MP2 Capital as well as a $1.72 million grant from the Connecticut Clean Energy Fund (CCEF). CCEF is a creation of the Connecticut General Assembly and is funded by the electric ratepayers. CCEF’s mission is to promote, develop and invest in clean energy sources.

“The solar PV installation at Northwestern High School in Regional School District No. 7 will serve as an excellent teaching tool to help educate students about the importance of renewable energy in meeting our future energy needs and protecting the environment,” said Lise Dondy, president of CCEF. “We are pleased to see this school district and many educational institutions around the state taking a leadership role in making the commitment to clean energy in such a significant way.”

The school also hired a part-time teacher to build a curriculum centered on environmental science and technology. The classes incorporate data collected from their solar equipment and created a real-time visual display for the public to view (click on picture below during daylight hours). 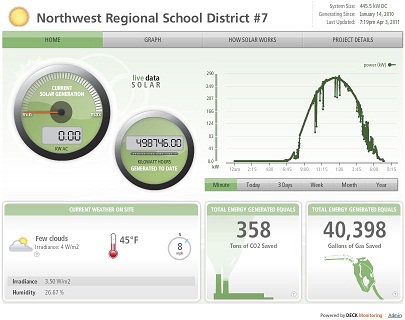 Northwestern High School has also partnered with Northwestern Connecticut Community College. This collaboration has resulted in plans to create an associate’s degree in “Green Technology and Sciences”. Students at both the high school and college participate in these shared courses. The solar facility and resulting educational programs complement each other as this effort fits in well with science, math, environmental and sociology studies.

More schools across the country are adopting similar programs. The majority of these efforts appear to be located in California and Colorado.