Rowan County, N.C. is the only county in America where both the K-12 public school system and the Community College rank simultaneously in the top 10 in each of their recent national annual competitions for on-line learning infrastructure and capability. 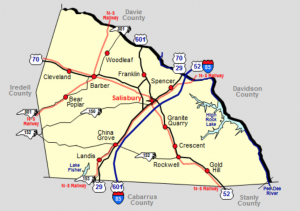 Note: The author, Dr. Francis Koster, Ed.D., did his graduate work with a focus on threats to the basic life-support systems of air, water, food, and fuel. He spent the majority of his career innovating in one of the nation’s largest pediatric health care systems. His wife, Dr. Carol Spalding, is the President of Rowan Cabarrus Community College, which is mentioned in this article. Third-party source material for all references to Rowan Cabarrus Community College can be found in the footnotes and was not supplied through personal connections at the college.
During the last two “pre-covid” school years, Rowan County was the only county in America where both the K-12 school system and the community college both scored in the top ten in the nation for their on-line teaching capability.
Rowan/Salisbury schools and its 20,000 students is one of the most advanced on-line public school systems in the country, ranked in the digital top 10 large K-12 school systems in America over several years for its digital technical infrastructure and teachers trained in electronic teaching, and because of the school systems success in ensuring that the students have access to the Internet through widespread installation of electronic equipment that allow all students throughout the district to connect to the school system. (1)
Rowan Cabarrus Community College (RCCC) and its over 20,000 enrollees have also been ranked in the top ten digital large community colleges in America.  RCCC has been ranked in the top ten four of the last six years and currently has nine fully transferable on-line Associates Degree programs in place. (2)
Because of RCCC’s advanced digital teaching capability, area college students who are concerned about going back to dormitories and in-person classes can also take transferable on-line classes while remaining at home.
Kannapolis city public school system has also been coordinating junior and senior-level high school students’ enrollment into RCCC so those students earn credit on-line towards high school graduation requirements and earn transferable college credits at the same time.
These three educational institutions also work together to provide student access to college credit courses online.
One out of every five Americans work at or attend public and private K-12 schools. (3) The next year is going to be very difficult for our nation’s schools, for parents, and for our economy.
It has only been 4 months since the 100th case of COVID-19 was announced in America.  Since then, more than 5.4 million Americans have been diagnosed as infected, more than one million of those have long term damage to their health and more than 160,000 people have died.  One million new infections occurred in the last 18 days. (4)
Under guidance given by North Carolina’s Governor Cooper, on-line and/or in-person classes began August 17. (5)
According to a study published last week by Dr. Spencer Fox of the University of Texas who used county-specific data from all across America to calculate the existing rate of infection among children, approximately one out of every 100 K-12 students who show up to attend school in Rowan County public or private schools will arrive already infected. (6)
Like half of all American schools, the majority of school buildings in Rowan county do not have air conditioning systems that allow fresh air to be added to the classroom during the day. (7)  The existing systems takes the old air students and teachers have already breathed, sucks it out of one classroom, adjusts the temperature, and puts it back into another classroom over and over, all day long.   Both locally and nationally It does not take many infected kids or teachers to spread the disease widely.
Public health experts agree that the vast majority of schools that try to start the school year with in-person classes will have to close shortly after the school year starts.
Nationally, there will be several areas of impact.  The first is that because of the lack of broadband and computers in low-income homes, the dividing line between social classes will widen.  The second is that our entire country’s education system (including students) will become more skilled at using e-learning. The third is that distance learning or e-learning will be a major component of our educational system going forward even after the epidemic is defeated.
Experts, including Dr. Anthony Fauci, Director of the National Institute of Allergy and Infectious Diseases, believe a vaccination will be invented and ready for use around Christmas, and after that, it will take four to six months to inject our 336 million citizens. (8) The number of infected will continue to rise until enough citizens get the vaccination. However, recent polls show that one out of every four Americans would decline to be vaccinated, which could keep schools closed even longer.
From an educational perspective, Rowan County is in a much better position to implement on-line learning than most of the rest of the country and has laid the foundation for a strong economic recovery.
The job is not done.   As the epidemic assaults our country, one thing that concerned citizens can do is volunteer.  You can help, including tutoring of students which can be done remotely by sharing computer screens, helping sanitize the school bus fleet, pitching in on preparation and delivery of food to needy students, and creation of outside learning spaces.
We have a very tough year in front of us, and ‘business as usual’ will not protect our economy, our health, or our children’s education.
Have you stepped up yet?
Sources
(1a) 2017/2018 = https://www.govtech.com/education/awards/digital-districts/National-Survey-Awards-School-Districts-for-Pioneering-Uses-of-Technology.html
(1b) 2016/2017 = https://www.govtech.com/education/awards/digital-districts/Digital-School-Districts-Survey-2016-17-winners.html
(2a) 2017/2018 = https://www.govtech.com/education/awards/digital-community-colleges/Innovative-Collaborative-Digital-Community-Colleges-Recognized-in-Annual-Survey.html
(2b) 2016/2017 =https://www.govtech.com/education/awards/digital-community-colleges/Most-Innovative-Digital-Community-Colleges-Recognized-in-Annual-Survey-.html
(3) https://www.epa.gov/iaq-schools/how-big-problem-poor-indoor-air-quality-schools
(4) https://coronavirus.jhu.edu/us-map
(5) https://www.newsobserver.com/news/coronavirus/article244212772.html
(6) https://www.nytimes.com/interactive/2020/07/31/us/coronavirus-school-reopening-risk.html
(7) https://www.epa.gov/iaq-schools/take-action-improve-indoor-air-quality-schools        confirmed by personal communication with school facilities personel, later confirmed by senior administration.
(8) https://fortune.com/2020/08/11/covid-vaccine-when-timeline-progress-access-rollout/
BUY NOW
BUY NOW
BUY NOW